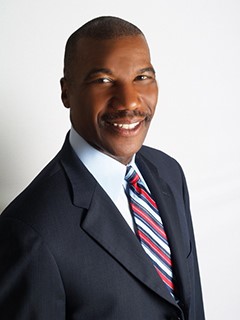 Glenn Henderson is the former CEO of AFC Worldwide, a transportation and logistics company that he founded and later sold in 2009. As a first responder, AFC Worldwide was instrumental and deeply engaged in the relief efforts of the 911 tragedy and was recognized by Black Enterprise Magazine as one of the top 100 Minority Business Enterprises in the country. The company was recognized nationally as being the best in the business throughout its more than 20-year history and was selected as Hallmark's Vendor of the Year for three consecutive years. A self-described "serial entrepreneur," Henderson has established and served as CEO for a number of businesses including Business Accelerators, a company accelerator and incubator focused on small to mid-size, nonprofit and startup companies, and AFCLS, a global logistics and transportation company. He is also co-founder of Upscale Personal Care Home, an assisted living facility in Jacksonville (FL). The author of Rock Solid Principles of Business Development and Treasures of Darkness, Henderson has been an academic speaker on business leadership and development at Harvard Business School and Northwestern University's Kellogg Business School. He received the Jacksonville Business Journal's Diversity Award in 2014 and serves, or has recently served, on the boards of Crown Financial Ministries, Cherokee Boys and Girls Club, Georgia Minority Supplier Development Council (GMSDC), and Fellowship of Christian Athletes. He lives in Jacksonville with his wife and three children.

Elected to the Easterseals National Board of Directors in 2020, Mr. Henderson currently serves as Secretary of the Board, vice chair of the Affiliate Relations Committee and member of the Executive Committee.