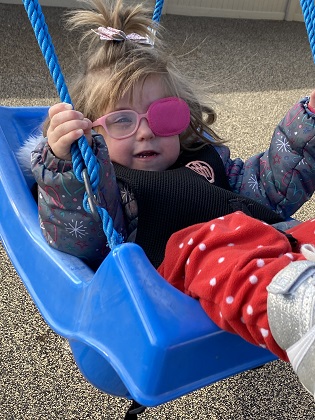 Madi’s, a student at Easterseals Western and Central PA Child Development Center in State College, story begins on September 8th, 2017 when she was born at 23 weeks gestation. She weighed just 1 lb 10 oz, was 11 inches in length, and was diagnosed with Twin-to-Twin Transfusion Syndrome. We spent 10 weeks in the NICU at Johns Hopkins Hospital in Baltimore, where she received pain and blood pressure medications, antibiotics, and mechanical ventilation to enable her to breathe. Once she was weaned off of the ventilator and stable, we transferred her to Hershey NICU, which was a little closer to home.

While in Hershey, Madi had surgery on her eyes to treat her Retinopathy of Prematurity (ROP) and was placed back on a ventilator for several weeks until stable enough to receive oxygen through a nasal cannula. During this time, when Madi was about 18 weeks old, we learned that she had a brain bleed that could have some long-term effects on her development. Despite this, we focused on the incredible strength and courage of this tiny little girl, who already showed an unbreakable will to defy the odds. Finally, after 10 weeks at Hershey, Madi was able to go home for the first time.

Once home, Madi received feeds through a nasogastric (NG) feeding tube and immediately began intensive physical and occupational therapies through Early Intervention. Slowly but surely, Madi achieved milestones of head control, feeding orally, rolling, and grasping toys. Then, when Madi turned 18 months old, she was diagnosed with Cerebral Palsy. We continued to remain positive, treating Madi no differently than our other children and always encouraging her to work hard, and she continued to do just that. She began speech therapy in addition to her other therapies, and started to babble and imitate. Before her second birthday, Madi was able to sit independently, pull to stand, and cruise. At 2.5 years old she began walking with a posterior walker and suddenly started speaking in sentences. Although Madi still has some challenges to overcome, she is a bright, sweet, happy little girl who loves baby dolls and purses and conquering any adversity that comes her way.

To find out more about the Child Development Center or to see tour of the site, click HERE.

To see a tour of the Child Development Center, by site Director Jess Confer, click HERE.