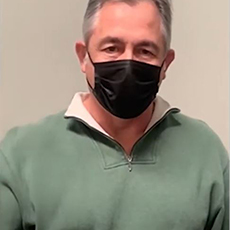 John, a participant with ESSC's Senior Day Services in Brea, was diagnosed with early onset Alzheimer's. Even during the pandemic, John visits the senior day service center, which is providing limited in-person support, several days a week to help other participants with daily activities. He recently narrated this COVID-19 safety and awareness video for participants and associates.

John's wife, Susan, wrote the story below. It demonstrates the importance of finding a purpose in life, a foundation of what we do at ESSC and something everyone deserves, no matter what their disability may be.

At age 59, John's Alzheimer's diagnosis came as a surprise to everyone. As a successful defense attorney for a large insurance fund, John rose rapidly through the ranks to lead a team of several lawyers. Then, slowly at first, his impeccable memory would fail him and he would say things like, "I don't remember the law like I used to" and he answered more and more questions with "I don't know." Gradually, he became more dependent on his coworkers and his judgment seemed to be off.

John and I turned to his doctors for guidance. Their initial diagnoses was that his memory issues were caused by depression; address the depression and that would resolve the memory problems. Alzheimer's wasn't even considered given his young age.

John tried everything, but his memory only became worse, eventually leading to an early retirement. This affected our family's income and retirement plans, as well as John's mental state. As he started relying on others for simple tasks, he became frustrated and felt like he had no purpose.

John spent a couple years at home trying to keep himself busy. He was bored and saw himself as someone who didn't contribute to society in any way. I became worried that he would soon be unable to handle household emergencies or stressful situations on his own.

Eventually, John was diagnosed with early onset Alzheimer Disease (diagnosis before age 65). The uniqueness of the early onset version of the disease is that it attacks its victims while they're still in the prime of their careers. This impacts family members, which are often caregivers.

It's been 3 ½ years since his Alzheimer's diagnosis. It's heartbreaking that our children don't know him as the smart, opinionated, funny and interesting man he used to be; their relationship completely changed when John was in the prime of his life. I work at a school for children with severe disabilities, both medically and behaviorally. That makes it a little easier for me to step into a caregiving role with my husband. At least I hope so.

It was at an Alzheimer's Support Group where I first learned about Easterseals. I knew John wouldn't like the idea of going into day services, so we approached it as volunteering to help others at the Easterseals Senior Day Services. This helped John immensely – not only does he participate in exercise classes and memory games, he feels like he's spending his time helping others. For the first time in a long time, John has a purpose in life thanks to Easterseals.

Our Senior Day Services are person-centered and meet the needs of families caring for an elderly parent or spouse by offering support and respite for caregivers during the day, while providing assistance and quality care in a comfortable setting.