Michael’s Journey to Meaningful Employment during the COVID-19 Pandemic 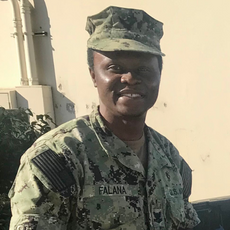 Michael’s Journey to Meaningful Employment during the COVID-19 Pandemic

Not every client of the Bob Hope Veterans Support Program has a story that begins in the United States. Born and raised in Nigeria, Michael worked as a public health professional immunizing young children against polio and conducting medical research among postpartum mothers. When he immigrated to the United States at the age of 27, Michael enlisted in the US Navy to serve his new home country as a Hospital Corpsman. After six years of honorable service, Michael was faced with some challenges which led to the end of his military career earlier than he had planned. He separated from the Navy as an E-5 in April 2021. Michael, his expectant spouse, and his young child faced a daunting and uncertain future as Michael’s transition to the civilian workforce occurred during the COVID-19 pandemic.

During this difficult time, Michael was connected to Easterseals Southern California’s Bob Hope Veterans Support Program (BHVSP). Working closely with the BHVSP team, Michael was able to tap into a variety of professional support services, such as mock interviews, employment referrals, and job application support.

In September 2021, Michael accepted a position as a Research Specialist at the Veteran Affairs Health Care System where he assists in their national research program to learn how genes, lifestyle, and military exposures impact the health and wellness of veterans. In his new role, Michael will continue to serve the veteran community through meaningful and vital research.

“I am overwhelmed by the tremendous way you all have assisted me during my transition and I have been looking forward to the day that I will work alongside you,” Michael shared. “I really do appreciate the work that you all do. Please keep it up!”