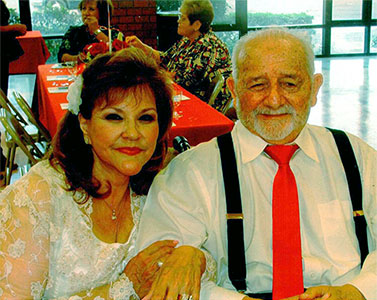 Leonard with his wife, Darlene.

Darlene Olguin feels fortunate that her husband Leonard connected with Easter Seals Senior Day Services in Orange County back in 2004 when he went twice a week to visit with his older brother, Fred at Easter Seals.  The brothers loved reminiscing together and enjoyed each other’s company.  It also kept Leonard from being bored and lonely at home while she was at work.  The Senior Day Service, which operates Monday through Friday, provides older adults who have cognitive impairments or physical disabilities with social engagement opportunities, exercise and personal care assistance.

A retired professor, Leonard has a Ph.D in Educational Psychology from the University of Southern California and is a linguist who speaks three languages fluently.  In his spare time he previously sailed his boats throughout the world, received his pilot’s license, and sang in a barbershop quartet for 35 years.

When Leonard was diagnosed with Alzheimer’s disease in 2005, he became a daily attendee of the Senior Day Service. Darlene says that it was a relief that Leonard was already affiliated with a service near their home that provided him with the necessary level of daily support so she didn’t have to worry about placing him in a nursing home or other institutional setting. In addition, she could continue to work without worry.  From the beginning Leonard loved interacting with other people at Easter Seals and participating in activities such as the music program and pet therapy.  He enjoyed senior services so much that he had no issue with continuing to attend daily-- even after his brother Fred passed away in 2006. 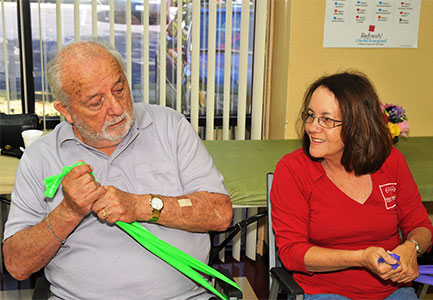 In 2008, Darlene was invited to attend a tribute luncheon that was created for Leonard.  The staff at the Brea location screened a video his son had created in honor of Leonard’s life in education and created a photo collage to accompany the presentation.

Darlene was immensely touched by the time that was invested in the presentation.

“As long as he is able to move I will take him to Easter Seals,” Darlene said. “The associates go out of their way to provide the best services. They are good about communicating any issues and they genuinely care about his health and welfare. I also believe the stimulation he receives on a daily basis has kept him in the middle stages of Alzheimer’s, and held off it’s progression, for longer than the average person.”

“He has dignity there, and that is so important,” Darlene added.

Support Easter Seals through the I Heart OC campaign on April 27 from 3 p.m. to 6 p.m.