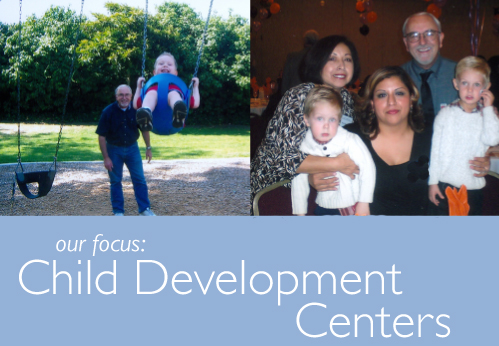 Mary-Helen and PeterWingert enrolled their grandsons, four-year-old Thomas and three-year-old Scott Baxter, at the Child Development Center (CDC) in Upland in 2006.

Mary-Helen and Peter had recently taken custody of the boys when their mom could no longer care for them.Thomas and Scott were diagnosed with special needs, including speech and language delays and were enrolled in the Head Start program.

Easter Seals Child Development Centers provide comprehensive services for children from birth to age 5.The CDCs support kids with disabilities to achieve academically and socially along with their nondisabled peers.

Teachers at the CDC worked on the goals set for each child and noticed great improvement over time. Thomas did so well that he exited out of the special needs program at the local school district after only a year and is now developmentally with his peers. He graduated into kindergarten in June 2009. Scott started Early Head Start at age one with no ability to form words. Hebegan kindergarten on-track in 2010.

“I’m so thankful for Easter Seals and their staff, they have helped my grandsons tremendously,” says Peter. As a result of the success his grandsons experienced at the CDC,Wingert became a member of Easter Seals Board of Directors.

“I am very committed to Easter Seals and strongly believe in its mission to support all people with disabilities and special needs and their families," says Wingert.