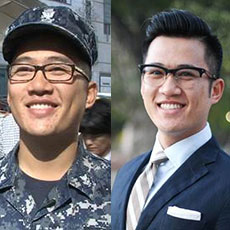 Veteran Jonathan Nguyen enlisted in the United States Navy immediately after his high school graduation in 2004 and served for 10 years, advancing to an Electronics Technician, Petty Officer Second Class. After exiting the Navy in 2014, Jonathan attended California State University, Fullerton (CSUF) to earn a Bachelor of Arts in Business Administration with a concentration in Entertainment and Hospitality Management.

During his time as a student, he took on a leadership role in the Student Veterans Association (SVA) on campus and discovered that he enjoyed supporting other veterans.

As graduation approached, Jonathan began to question his future in the hospitality industry. The Veterans Resource Center at CSUF referred him to the Easterseals Bob Hope Veterans Support Program for additional guidance.

Easterseals initially worked with Jonathan to secure employment with a high-profile catering company in Orange County while connecting him with other Orange County-area veteran organizations for additional career exploration. An informational interview at a particular veterans’ center resulted in Jonathan being offered the office manager position before the job was posted online. He is now looking forward to more achievements in his new career field.

Jonathan immigrated to the United States from Vietnam with his mother when he was a baby. He was raised in a single-family home with his brother, who has a disability, and is now the primary caretaker for both. He appreciates the support he has received from his Easterseals employment specialist who acted as a mentor, sounding board, and helpful resource towards a fulfilling and meaningful civilian career that will also allow him to provide stability for his family.

Click on this link to learn more about our Bob Hope Veterans Support Program.