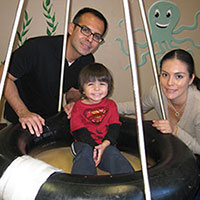 Jonas with his dad and mom, Giovanni and Gabriela.

Jonas Abril was 18 months old when his pediatrician noticed he was still not saying words. His mom, Gabby also noticed that Jonas made no eye contact and flapped his hands in an action called “stimming,” but she had only considered him “wild” compared to his older brother.  At first she did not realize there was a developmental issue that needed to be examined further.  However by age 23 months Jonas was diagnosed with autism.

Jonas immediately entered an autism early intervention program and a short time later was referred to Easter Seals Autism Therapy Services for Applied Behavior Analysis (ABA).  Gabby noted from the start how everyone at Easter Seals, from the therapist to the supervisors and managers, listened to their needs and were patient with Jonas and the family.

“His therapy was life changing for the whole family,” said Gabby. “It helped my husband, our other sons and me deal more effectively with his behaviors and lessened the stress of the situation for all of us.” 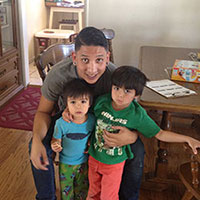 Jonas (R) poses with his therapist Sergio and his younger brother, Lucas.

Therapy started with 15 hours of ABA a week. While the schedule of the sessions took some getting used to, Gabby says the sessions didn’t feel like “work” to the family because they were fun for Jonas and included community outings like grocery shopping and trips to the park.  During the two years he met with his therapist, Jonas learned key skills such as waiting his turn, asking mom first before running off, playing with other children and his siblings, and other appropriate social interactions.

Everyone was delighted when progress came quickly enough for Jonas to conclude his ABA therapy before he entered kindergarten. While there were some tears when Jonas realized his beloved Easter Seals therapist would not be visiting his house any longer, he understood that just like he was leaving pre-school to go to kindergarten, he was also leaving his therapy behind, which was something everyone could be happy about. 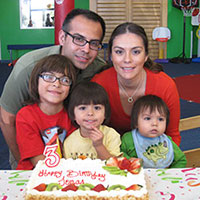 Jonas (center) celebrating his birthday with his parents and his older brother Giovanni (left) and younger brother Lucas (right).