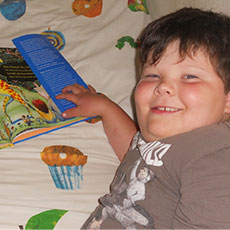 Before Craig began working with Easterseals in 2012, his family had tremendous difficulty taking him out in public to do simple tasks like running errands and going shopping. He would often throw tantrums and fall to the ground inconsolably, making everyday outings a challenge. As a nine-year-old on the Autism Spectrum, Craig had great difficulty asking to have his needs met and had very limited self-help skills.Craig began receiving ABA from ESSC’s Autism Therapy Services with Behavior Interventionists coming to his home.

His mom Amy said, “I felt like they were meant to be with us.” Craig worked with different Behavior Interventionists throughout his five years with ESSC.

Melanie Vorman, who started out as a Behavior Interventionist, later became Craig’s Program Manager. “When he first started, he had frequent tantrums which included falling to the floor, yelling, and pulling on another person’s arm when he was denied access to a preferred activity,” Melanie explained. “Over the past five years he has made vast improvements. He no longer has tantrum behavior and has improved his coping skills in the home, at school, and in the community. The clinical team worked on community outings with his parents both through direct intervention and parent consultation. He is now able to go on shopping trips with his family without having any problem behaviors. In addition, he became very successful at completing an Independent Activity Schedule and enjoyed completing activities and crossing them off the list.”

These behavioral changes had a positive impact for the entire family. “They taught Craig how to communicate, be patient and understand how to get his needs met,” Amy explained. “He graduated out of services because he doesn’t have behavioral problems any more. When he got too big for me to pick up I was worried I wouldn’t be able to go out in public any more. But Easterseals changed him to a young man who can act appropriately. He is very happy now. I couldn’t be more grateful.” 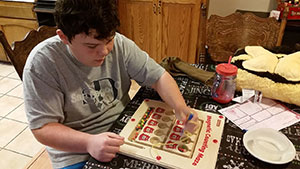 She added that ESSC programs were also helpful Craig’s younger sister, Kate. “They supported Kate through (SibShops, workshops arranged for siblings of individuals receiving services from ESSC). It was a safe space for her.”

Amy wants to encourage other families in similar situations to persevere and know that help is available. “I hope that other parents who have kiddos like my Craig who are struggling know that it gets better – don’t give up,” Amy said. “A lot of parents who are deep in the trenches at home with their kiddos don’t know how to find help. I hope that pediatricians all around know about Easterseals and tell their patients about it.”