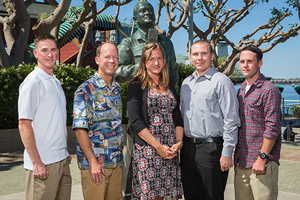 Clients of Easter Seals Veterans Services gathered at the "National Salute to Bob Hope and the Military" sculpture in Tuna Park where they met Hope’s granddaughter, had a chance to share their military transition experiences and challenges, and thank her for her generosity in the creation of The Bob Hope Veterans Suppport Program.

“She enjoyed hearing our stories and clearly was invested,” said Christopher “Kip” Wallace, a Marine Corps veteran.  “I let her know that thanks to the WF/MVS, I’ve been able to talk and be more open, which has resulted in a vast network of people willing to help me build my business.”

Earlier this year, Miranda Hope provided a $1.1 million grant from the Bob and Dolores Hope Charitable Fund in support of Easter Seals' Bob Hope Veterans Support program. The funds were used to launch employment services to veterans transitioning out of the military.

“When I first contacted Easter Seals Veteran Services, I thought I would get a suit and assistance on my job interview skills,” said Michael Salisbury, a U.S. Marine preparing to leave the military. "I have received so much more support in the employment process. I told Miranda how helpful the Bob Hope Program has been for me."

In addtion to meeting with the veterans, she interviewed with San Diego's ABC affiliate KGTV regarding her support of the Easter Seals and our Bob Hope Veterans Support Program.

Enjoy photos of the day here.