A Veteran and His Son Find Support, Care Through Easterseals Military & Veterans Services 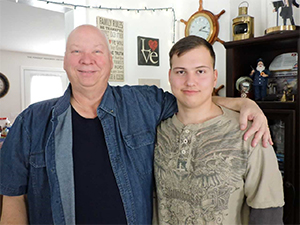 Mike Hildreth and his son Alex have faced their fair share of challenges. On September 11, 2017, Karen Hildreth passed away in a tragic motorcycle accident as Mike, her husband of 22 years, was following her. This loss took a devastating toll on Mike and Alex, both emotionally and financially, making it difficult to go about their daily lives.

“I relived the scene thousands of times,” Mike recalls. “I was a mess, I couldn’t function, and I wasn’t sleeping an hour a night.”

Mike was active in the Army for three years during the mid 1970s, and went on to a lengthy career in law enforcement. Alex, following in his dad’s footsteps, enlisted in the Army National Guard in 2015. Unfortunately, a year later during basic training, Alex was bit on the arm by a poisonous spider, leading to numerous medical issues and the inability to continue working. Together, they have spent months trying to get financial help from the military, but have been unsuccessful in their attempts so far. Despite all of this, Alex is still active in the National Guard.

For both father and son, life was spinning out of control. Alex reached out to his unit’s chaplain to express their struggle. That’s when the chaplain suggested they reach out to Easterseals Military & Veterans Services at Easterseals New Hampshire. They were quickly paired up with Care Coordinator Deanna Monroe. Mike had always known about Easterseals, but never had a clear understanding of the support that Easterseals could provide until he met Deanna.

“I can’t say enough good about her. She is phenomenal and has been a godsend to me,” Mike stated. “She has been extremely open and honest and knows exactly what to say to make me feel at ease.”

When Deanna, Mike, and Alex started working together, the first thing they focused on was dealing with their grief over Karen’s loss. That continues to be an ongoing process. Deanna has also helped, and continues to help, Mike with managing his finances and connecting him with community resources so that he can continue moving forward in a focused and organized manner.

In late fall, Deanna submitted Mike’s name to Eastern Propane to be considered to receive a season of free home heating oil. Due to his circumstances, he was selected and as Mike says, “The timing could not have been more perfect. We weren’t getting any extra pay and we were always trying to figure out where our next meal was coming from. It was a big burden relieved.”

Since Karen’s loss, Deanna has been a major factor in helping Mike and Alex get their lives back on track. She visits their home every couple of weeks, and stays for as long as they need. Her appointments are only scheduled for an hour each, but according to Mike, she will stay for much longer if needed.

Deanna has helped them tremendously through their healing process and their financial instability. Right now Mike’s biggest focus is getting Alex support for his medical issues.

“Don’t wait for luck. Reach out for help and don’t be embarrassed,” said Mike. “There is always someone there. Don’t give up. Easterseals is there to help you. They can and they will.”