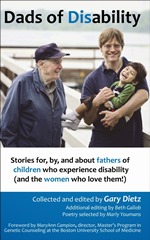 In this personal essay (originally published in the book Dads of Disability, a collection of essays curated by Gary Dietz), Douglas Keating shares what it felt like to hear his 4-year-old son say "Great!" For some parents, hearing that word may be more profound than one might think.

“Great!” my son Charlie exuberantly answered when my wife asked him how the previous night’s baseball game was. It was one of the first baseball games he attended, going with his older sister and me. As is sometimes the case, he paused a bit before he answered, coming across both as a typical 4-and-a-half-year-old kid trying to generate a thoughtful response and, to the semi-trained eye, as a kid with Childhood Apraxia of Speech (CAS).

One aspect of having apraxia is that Charlie has to first think about how to say what he wants to say. The “gr” in the word “great” is what’s called a blend, a sound that two or more consonants make, which is not easy for someone with apraxia to pronounce. But he pronounced it very well. Charlie has gone from a handful of barely-intelligible words two years ago to a child who routinely impresses my wife and me with his loving, polite, witty and inquisitive talk.

It has been a lot of work, especially for him, a lot of doctor’s appointments, even more therapy sessions, and still a lot more work to be done. At least receptively, Charlie’s vocabulary numbers in the thousands now, yet this one-word answer meant a great deal to me, one of the joys of being a dad of disability. You appreciate the small things more—like something as simple to most as saying the word "great"—when they take a lot of work to accomplish.

Plus, there was Charlie’s typical “happiest kid on the block” tone of voice when he said it and also because of why he said it. As a dad, it’s nice when your son starts to show an interest in sports. I could recount the bigger events in Charlie’s life, but it’s these seemingly little things that really aren’t little at all.

Baseball isn’t the simplest sport for a young child to understand. Try explaining a stolen base to a four year old, and you’re likely to get a “did he get in trouble for stealing?” response. At times, watching a baseball game can be boring. And at times, it can be too noisy for a kid like Charlie, because he also has Sensory Integration Disorder. Short definition: loud noises really bother him. It’s manageable and something we’re working on. Charlie held up well though, and the peanuts he thoroughly enjoyed turned out to be a nice distraction.

My wife asked him why he thought the baseball game was “great.” Charlie said he was really amazed by how high and far the players could hit a baseball. A high-pop fly ball that didn’t reach the outfield or a routine fly-ball out that did-I can understand how a four year old can see that as amazing. Even if he didn’t understand all the rules.

As delighted and amazed as Charlie was about the “great” baseball game, it couldn’t compete with the delight and pride his father felt about his ability to express himself verbally. It was, as Charlie would say, “Great!”

Doug Keating lives in the Boston suburbs with his wife Crystal, his 8-year-old daughter, Sylvia, and his 5-year-old son, Charlie. This is his first published essay.

Learn more about the collection of essays found in Gary Dietz's book, Dads of Disability.