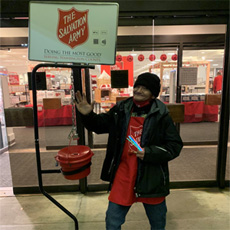 Robert is a Native American, U.S. Army Vietnam Era Veteran, who was stationed at Fort Dix, New Jersey. During his service, Robert trained and worked as a Radio Voice Operator. Robert’s Military Occupation Specialty (MOS) was very unique, because the Army encouraged Native Americans to communicate in their own native languages on the radio, in order to confuse enemy forces.  Robert received an honorable discharge from the US Army in 1975 two months before the end of the Vietnam War.

When Robert returned to civilian life, he struggled deeply with depression and Post Traumatic Stress Disorder (PTSD), which lead Robert to struggles with addiction. Though he has faced difficulties through the years, his positive attitude has always shined through. It’s very clear that Robert loves working with people and helping others.

Robert has struggled with homelessness and addiction over the past 10 years; but through the help of Veterans Affairs (VA), he was able to get the necessary treatment to overcome his addiction. Robert has now been clean and sober for over a year and a half – nice work, Robert! Our Homeless Veterans Reintegration Program (HVRP) Program Manager, Teresa first met Robert at the Salvation Army Veterans & Family Center, in June of 2021. Robert made it immediately known that he was eager to get housed and get back to work.

During Robert's stay at the Salvation Army Veterans Center, his roommate sadly overdosed, which was a triggering experience for Robert. After this experience, he felt that he needed to leave the Veterans Center, in order to maintain his sobriety.

Getting Back on the Path to Stability

In November of 2021, Robert returned to the Salvation Army, and he was ready to resume working toward housing and employment, with the help of our team. Robert is currently looking to be housed in the Salvation Army long-term unit, which is a 2-year program. He believes this will help him get the case management he needs, and it will help him to save money for permanent housing.

After reconnecting with Teresa, Robert was excited to start looking for work, so he could give back to his community, regain a sense of direction, and get started on a career. He has repeatedly shown that he enjoys being around people, and he wants to help others, so this was a great direction for career-building. Teresa talked to Robert about job options, and he expressed interest in the Salvation Army Bell Ringer position. Next, Teresa spoke to HireQuest, who had been hiring for Washington County, and they were immediately interested in talking with Robert. In order to prepare Robert for this opportunity, Teresa conducted some mock-interviews and provided him with some pointers.

The Perfect Opportunity for Robert

Robert’s interview was a smashing success, and he was offered his desired position as a Salvation Army Bell Ringer, making $14.50 an hour! Additionally, he was offered a position with Salvation Army, working as a Demo Site Cleanup Laborer, so he could maintain employment after the holidays. Robert felt that he needed to get busy working as soon as possible, to keep his mind busy, and to avoid sitting in his room, feeling depressed. After talking with Gary Smith (Robert’s Veterans’ Affairs Social Worker), Robert and Gary agreed that the best thing would be for Robert to be engaged and away from downtown Portland.

Robert started working full-time on November 26th, at the in the Washington Square Mall Macy’s location. Robert says, “I love meeting all the people coming and going from the mall. I open the door for them, and they have been very generous. I was told that I have been bringing in over $200 every day, and I love knowing I am paying it forward to the Salvation Army.” Teresa reported that she can see why he is very successful at his new job: “Robert has a smile that can make you forget about any sadness.”

Easterseals Oregon has provided several forms of assistance to Robert, in order to help him get back on his feet. Robert was provided with a Chromebook (funded by a grant from our partners at Comcast, to help him with job search), resume-writing assistance, bus passes, comfortable/supportive shoes for his job, and lots of coaching and motivation.

Robert stated, “I am so thankful for the help you are giving me, and I am going to make you proud of me. This opportunity is life-saving for me, because I can help others; and in turn, I can help myself be happy. I feel good about myself, and this is the first time in a long time that I feel that people respect me and see me as useful.”

Teresa's Testimony After Working with Robert

Teresa had the following to say, after working with Robert: “What is success? Is it measured by our accomplishments, or is it measured by how our accomplishments make us feel? For Robert, I believe success is measured by how his accomplishments make him feel. Some think that the amount of money you earn is the measurement of your success; but for Robert, success is about giving back to others and feeling happy. Since the day I met Robert, I have felt the kindness he has in his soul; and the excitement and happiness I have felt from Robert, since helping him get this job, is why I have decided to share his success story. When I went to the mall to take this picture of Robert, I stood back so he couldn’t see me, and I watched his interactions with others. WOW! His kindness and smile definitely make you feel generous.” 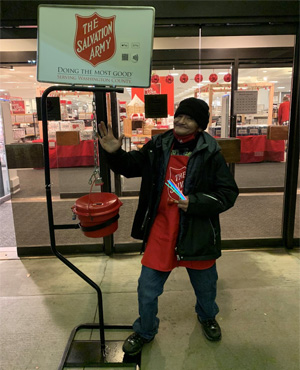 If you or someone you know is a US Military Veteran who is homeless or at risk of homelessness, please contact us by clicking here to learn how we can help!

To learn more about our Miliary & Veteran Services, click or tap here.