Getting the Tools to Carve Out a New Future 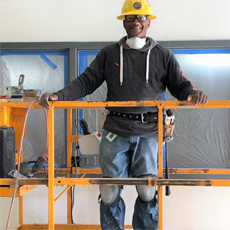 Richard, AKA “RA” is a United States Marine Corps Veteran, with drive and commitment to bettering himself and helping others. He was in the Marine Corps for four years, followed by two years in the US Marine Reserves. He started in the infantry, then he worked as a legal clerk, stationed in Ft. Lejeune, North Carolina.

When RA returned to civilian life, he was successful and comfortable for some years; but that slowly changed, as he started experiencing Post-Traumatic Stress Disorder (PTSD). RA was able to deal with it for a time, but it soon started affecting his ability to reliably show up to work, eventually escalating to the point that he lost his job. After losing his income, RA wasn’t able to maintain stable housing, and he became homeless.

RA does not like to talk about his experience with homelessness, but he does like to talk about those who helped him overcome barriers to escape it. He is especially grateful to Tito Mendoza - one of our partners that works for Clackamas County - who got RA into the Veterans Retraining Assistance Program (VRAP). Additionally, Tito helped RA find housing while providing some counselling and encouragement to find employment. Tito referred RA to Ken Bietschek, a close Easterseals Oregon partner, who works for Clackamas County Community Solutions. Ken referred RA to one of our Homeless Veterans Reintegration Program (HVRP) Employment Specialists, Maureen, and they worked to together to help RA find a job.

The Right Tools for the Right Career

RA expressed early on that he had no interest in going back into an office environment for work, because he wanted to work with his hands. He was specifically determined to become a carpenter. Maureen approached our partners at Tools for Troops, in order to get used tools for RA. At that time, he was living at Vets Village, which is a transitional community for homeless Veterans, in Clackamas County. Along with numerous other tools, Tools for Troops provided RA with a table saw, which he shared with the Veterans at Vets Village, to make things they used around the village.

Next, Maureen connected RA to the Carpentry Union to see about apprenticeships. They informed him that apprenticeship programs only start once a year, and he had missed it for that year; however, they also informed RA that he could immediately join as a carpenter’s helper, to put in time that would then qualify him to be a carpenter’s apprentice. Additionally, the union representative gave RA a list of contractors to contact, in the hopes of becoming a helper for one of them. Maureen helped RA build a resume to use when cold-calling contractors; and with the help of gas cards and work-appropriate clothing from our Homeless Veterans Reintegration Program (HVRP), he was able to go to work sites, in person, to seek opportunities.

As the job-search continued, RA struggled to maintain hope and motivation, but Ken and Maureen were able to provide continuous support and encouragement. Ken even provided RA with new work boots and some additional, brand-new tools, in order to give him a leg up in his search.

Entry to the Carpenters' Union

RA went to the local Carpentry Union office and found some representatives who were much more encouraging than the one he had initially met (at the main office). They told him that they could find jobs where he’d be needed, and they could assign him to jobs as a carpenter’s helper, if he was a member of their Union. In order to open this opportunity, our HVRP program paid for RA’s first three months of union dues, and he was filled with renewed hope to find a job.

Soon, the Carpentry Union sent RA to a construction firm that specialized in concrete. They were working on building the new Marriott Hotel, in downtown Portland. RA quickly discovered that concrete work was not for him. It was considerably too physical, lifting 45 lb. rods all day long, and he just couldn’t take it. When RA stepped away from the job, he wrote a letter to the employer, thanking them for the opportunity and explaining why he had to seek other opportunities.

Shortly after this, the union found RA a new position that was in finishing construction. In order to start this job, he had to go through an extensive background check, because he would be working on a school building, during hours when students were there. RA told Maureen that he was very excited about this job, and he was anxious about waiting on the background check, which took 4 long weeks to complete (ultimately coming back as a pass).

A Fitting Job With a Future

Finally, on November 28, 2021, RA went to work at a local middle school, as a Carpenter’s Helper, finishing dry wall. The first project was a large room that used to be a garage, converting it into a computer lab. He called Maureen, as soon as he learned his start date, and he excitedly announced that he would be starting his new job on the following Monday!

RA was given some training on how to complete his required tasks; and in just one day, he learned what he needed to know so that he could be left alone (if needed), and he could be trusted to do a respectable job. When Maureen visited RA at his jobsite (for a retention follow-up/check-in), he showed her the walls he was working on, and he demonstrated the scissor lift he used to get to the high places in this large tall room. He was also able to explain to Maureen the steps taken in cutting holes, plastering, and sanding.

RA assured Maureen that he would be able to keep this job, as it was not too strenuous, and he could work well with his supervisor. The contracting firm, Bratton Construction, told RA that they have many jobs coming up after this one; and as long as RA works hard, they will keep providing him with work.

RA's Plans for His Brighter Future

Now that RA’s hard work and persistence have pulled him out of homelessness, he wants to prepare to give back to his community. He plans to work into a Carpenter’s Apprenticeship within six months, work in that capacity for about four years, and ultimately become a Journeyman Carpenter. After he’s accomplished that milestone, RA wants to go back home, to Miami, so he can help young men, who have been incarcerated or are in danger of being incarcerated, learn a decent trade. He hopes that working with their hands and being productively employed can keep them on a responsible path to a better life. RA has expressed that he felt a calling to be a mentor and guide to troubled youth. He hopes to become a General Contractor, so he can hire these men as carpenters’ helpers or apprentices.

RA is very grateful to Easterseals and all the partners who worked together to help him. He said he could never thank Maureen enough for her encouragement, practical help, and belief in him. He stated that she always had his back, and he knew he could count on her.