Several Years of Homelessness Finally Came to an End 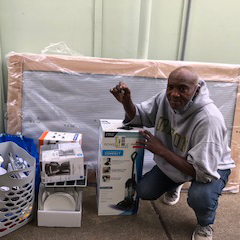 Bennie Harris is an Army Veteran who served honorably in the United States military. He was initially contacted by an Easterseals Oregon Supportive Services for Veteran Families (SSVF) Outreach Worker who found that Mr. Harris had been experiencing homelessness for several years, was living in his car at the time, and had lost all his ID which was creating a hardship for him in obtaining support services and in applying for housing on his own. After completing an intake assessment, Mr. Harris was enrolled in the SSVF program on June 2, 2020. He was 60 years old at the time and, combined with being homeless, it made him a member of the vulnerable population with regard to the COVID 19 pandemic that had escalated. Using CARES Act funds, SSVF paid for Mr. Harris to check into a motel and also provided him with a food box.

Mr. Harris reported he had “applied for apartments everywhere but no one wants me due to my criminal background”. In support of developing Mr. Harris’ Housing Stability Plan, his case manager and our Housing Specialist met with him and discussed steps to take to overcome his challenges: finding and obtaining stable housing, having no ID, and his criminal history. In the discussion, Mr. Harris reported that several years earlier, he had been able to rent an apartment in the area and in fact had done some building maintenance for the property owner at the time. He said he left on good terms and could attempt to contact the owner.
During this time, Oregon’s DMV offices were just starting to re-open after being closed for several months due to COVID-19. With his case manager’s help, Mr. Harris was able to schedule an appointment online at the local DMV. Our staff then provided him with a check for the reinstatement fee and he was issued his replacement Oregon ID on July 13, 2020.

While awaiting his appointment date with the DMV, Mr. Harris was connected with a HUD-VASH social worker to complete their housing assessment and get “application ready” to apply for a housing voucher. He also attended a SOAR assessment with our certified SOAR staff in order to evaluate and maximize the amount of Social Security Disability Income (SSDI) he was receiving. At the same time, our housing specialist began identifying housing that met Mr. Harris’ preferences – a 1 bedroom on the ground floor in the local area. Also, Mr. Harris’ case manager wrote a letter of reference/accommodation to serve as support for his rental applications, and Mr. Harris was asked to obtain reference letters from people that could attest to how he has made positive changes in his life and why they felt he would make a good tenant.

A New Home and a New Beginning

Mr. Harris signed a lease for a 1 bedroom ground floor apartment and moved in on August 12, 2020. SSVF paid for the security deposit and pro-rated rent for the month of August. At his move in, Mr. Harris’ case manager and housing specialist delivered a bed with linens, and his Homes for Heroes “Welcome Home Kit,” which provided him with a vacuum cleaner, a cookware set, a coffee maker, glasses, dishes, silverware, a silverware holder, utensils, dishtowels, hot pads, towels, hand towels, washcloths, a shower curtain and rings, a toilet brush, hangers, a laundry basket and laundry detergent.

Soon after Mr. Harris’ SSVF enrollment, he thanked his Case Manager several times during an appointment and made the statement “you guys have already done more for me in this short time than any other agency I have tried to get help from – I can tell you really like your job and care about the veterans”. At every appointment, Mr. Harris repeatedly expressed his thanks and at his move in said SSVF “is the real deal, they’ve changed my life”.

To learn more about our Military & Veteran Services, click here.

If you or anyone you know is a US Military Veteran who is homeless or at risk of homelessness, please contact us by clicking here to learn how we can help!