Home > _Easterseals New Jersey > Who We Are > Stories Of Hope 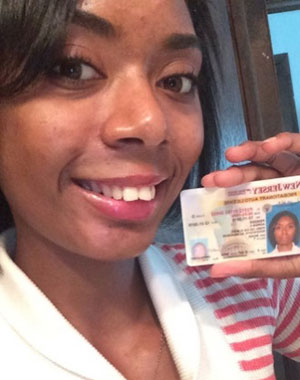 Adrien has proven that with hard work and a positive attitude, any goal can be accomplished and most obstacles, overcome. As of December 2015, Adrien is officially a licensed driver in the state of New Jersey!

Adrien, who lives not only with some physical limitations, but has also been diagnosed with some intellectual disabilities, enlisted in tutoring at our Easter Seals Millville, NJ location in the Spring of 2014 with the hopes of one day passing her driver’s test among other goals. In the beginning of her time with Easter Seals, Adrien faced some difficulty developing new relationships and adapting to the new atmosphere. With perseverance though, she has succeeded in reaching some of her objectives, overcome her social barriers, and has proven to be a great example and motivator for her co-workers. It became evident that regardless of the obstacles she faced, Adrien would persevere and maintain a positive attitude- a great benefit to herself and those around her.

“Adrien has made great progress in various areas. She is always willing to go above and beyond to help her fellow co-workers,” says Vicki Landicini, Senior Service Coach. “She has become dependable and always stays on task. We are so proud of all of her accomplishments and she truly has become an inspiration to her co-workers.”

While studying in preparation to pass the written driver’s test Adrien was also a dedicated employee at the site.  With continued encouragement from staff, Adrian’s hard work began to pay off as she finally received her permit and began to take driving lessons which she paid for with the money she earned from working.

"Easter Seals has changed my life in many ways, and the staff has made a big impact on my life. I used to be shy and Easter Seals helped me with my people skills and made me open up to be more adventurous and to try new things. When I first came here palletizing [for example] was difficult for me and scary, now I’m really good at it!"

When asked about what’s next for Adrien, she shared her hopes of pushing forward towards the future. “I'd like to work for the Easter Seals organization as a staff member, maybe a job coach, and help people like me with disabilities. I’d also like to go on to get my forklift license.”