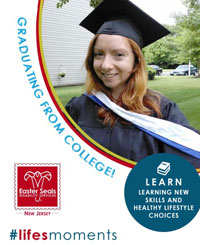 Five years ago, Sara, a young lady struggling with the effects of mental illness, found herself homeless.

Shortly after being referred to a homeless shelter in Monmouth County, she was transferred to an Easter Seals group home where she began to receive services.

Several years prior to her arrival at Easter Seals, Sara had attempted to obtain a higher education and enrolled in community college. But, because of her poor medication management skills, difficulty maintaining focus, and lacking relational skills, she had no choice but to withdraw.

With the help of the Easter Seals staff, Sara learned to manage her medications and the symptoms of her illness and she gradually began to move forward with her life. Her progress toward becoming independent was such that she was able to transfer to another group with less supervision. She re-enrolled in college and, with hard work and determination, Sara recently graduated with a bachelor’s degree in Humanities and a minor in American Studies!

Despite Sara’s many psychiatric diagnoses over the years, she learned that labels aren’t important and not to be concerned by what others think. “It’s not the diagnosis that matters,” she says. “Managing your symptoms and taking your medications – that’s what’s important.”

With the help of the Easter Seals staff, Sara learned how to maintain good relationships with her family and peers, how to handle stress and her mental illness, and successfully complete 4 years of college. “Now, I look forward to the future and getting my own car, apartment, and career,” she added.

Here at Easter Seals, our proudest moments come from being a significant part of someone like Sara’s road to recovery and we look forward to what the rest of the journey to full independence has in store!