Quitting Smoking: The Best Decision I Ever Made 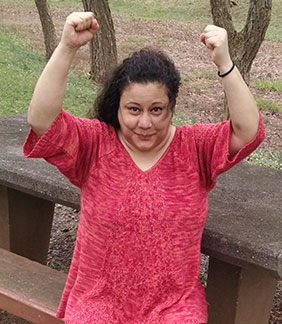 Hi, my name is Alicia and I receive Supportive Housing Services from Easterseals New Jersey. I would like to share with you how I quit smoking, which I view as one of the smartest things I have ever done for myself. I also view it as one of the greatest accomplishments of my life.

It’s been about seven months since I smoked my last cigarette on 4/22/2016. I tend to count my success by days so, that means it has been over 200 days. This time, it is for real. I had tried everything under the sun to help me stop smoking: therapy patches, counseling, tips and tricks from my father, but I never tried using self-determination.  I am thankful to my case manager for introducing me to a series of motivational videos on YouTube by Ralph Smart. They motivated me to start thinking on how to work on becoming a better and greater version of myself.

First of all, if I could go back and avoid sliding into this pit, knowing that I would spend several years trying to get out, I would have avoided it altogether. I wanted to belong and look cool with friends, something I now view as peer pressure. I was 17 years old then and 21 years later I was still searching for ways to quit. If it was so cool why had it been so cruel to me?

When I started my journey to quit smoking, I had help from Steeplechase Cancer Center at Robert Wood Johnson Hospital Somerville. I went to them several times until I made the decision to mix in the assistance with self-determination.  I strongly feel that I would not have succeeded without taking it upon myself to take those next steps towards success.

Why I finally decided to quit?

Smoking made me feel dizzy and fuzzy and that I was losing touch with reality. This was negatively impacting my studies as I was unable to focus and read. Smoking was also physically deforming me. It stained my skin and affected my breathing when I attempted to exercise.

I often had a feeling that people I came in contact with thought I smelled of cigarette smoke and this made me feel embarrassed. Some people argue that smoking is a socially uniting factor, but I grew to consider smoking an antisocial behavior. I always see smokers standing outside in the cold, rain, and snow while people who do not smoke are inside warm and dry. I considered this an antisocial behavior and it inspired me to quit.

I was often broke and running out of money, which made me feel miserable as I was forced to ask for financial assistance from my father.  I realize now that I have more money in my account at the end of the month than ever before.

Quitting smoking has improved both my physical and mental health. I no longer have that feeling that people are think I smell. My life has changed positively because of this experience. This is my story and I fervently hope it will inspire someone to quit as well.