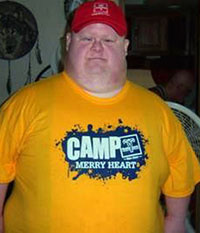 Initially, Scott was very shy upon arrival. But, after a few hours, his counselor, Sarah, introduced him to the other campers and staff members and his confidence began to increase as he started making friends.

In the beginning of the week, he needed frequent rest breaks while walking between buildings but by the end of the session, he was racing around camp and even telling Sarah to keep up with him! Scott’s favorite activities were swimming and dancing to the live band that played at camp, as well as enjoying the camaraderie around the campfire.

Both he and his mom were very pleased at the benefits to physical health and wellbeing from the recreational opportunities that Easter Seals New Jersey provides.