Home > _Easterseals New Hampshire > Who We Are > Wellness 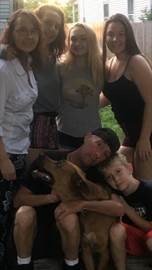 The Road to Success Starts with A Goal

For René Ingram, an office manager for ESNH Community Based Services, that goal was to finally kick her 20+ year, pack and a half a day smoking habit.

She knew it wouldn’t be easy as she had tried and failed three times before, but as a wife and mother of two teenagers and one pre-teen, her family has been her motivation to succeed. In addition to the guilt she had about her addiction and the poor example it set for her children, René had also watched her sister battle cancer and thought that would be what it took to finally quit but she still struggled to stay smoke-free as at that time, for René, the side effects of quitting made her feel worse. Additionally, the cost of cigarettes was huge. René was also worried about how her marriage to a smoker and her social life with other smokers would be affected if she were to quit.

Despite her doubts, René committed to her goal in June 2017. She was inspired to by the American Lung Association’s Freedom From Smoking Plus (FFS+) program, which is an online support program through Easterseals to help you quit. She knew she would also be supported by ESNH’s robust, staff-centered wellness program, which provided a wide range of opportunities to improve her health and well-being.  René realized that if Easterseals cared so much about her wellness, then she should care too!  René was one of the first employees to enroll in our FFS+ program. She jumped right in, followed the program to the letter, and completed it in just seven weeks.  She said the program held her accountable for quitting without putting pressure on her. She also found it was a huge help to form a partnership with her primary care physician who prescribed Chantix for her.

The benefits have been huge to her physical health, finances, relationships, and overall well-being.  René loves the new found connection she has to her family now that she is no longer missing out because she is busy taking smoking breaks. And, her family has embraced her efforts to quit. They even take turns calling her when she is driving her car—the time when it is hardest to resist smoking.

The money René is saving from not buying cigarettes is being used for a weekly family dinner out that has brought everyone closer together. She is using her asthma inhaler very little and her husband is even cutting back on his smoking. René says the wellness program has inspired her and she is looking forward to being an advocate to help others quit smoking.

She describes the importance of the support from her team at Easterseals, “I never thought I’d journey toward my health goals to the extent I have. What helps the most is having the support of friends and co-workers. In our department we are all trying something a little bit different in terms of diet and exercise but what helps the most is that we are trying together.”

We are so proud of you René and wish you continued success on your wellness journey!

Inspired by this story? Ready to quit? Stop Smoking Now!