Home > _Easterseals New Hampshire > Who We Are > Stories Of Hope > Spotlights 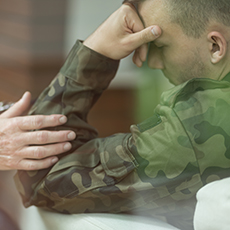 Military & Veterans Services provides critical and timely financial assistance and services when no other resources are available to service members, veterans and their families. 90 cents of every net dollar raised is spent on delivering services to those in need to ensure their dignity, health and overall well-being.

Steve returned from serving in Iraq and worked hard to secure a job as a diesel mechanic and settle back into civilian life. Steve realized he needed help budgeting if he was going to make ends meet. At the time, he was recently divorced and staying with a friend because he didn’t have a place to live. A lot was going on and Steve needed help to figure things out.

Fortunately, Steve was referred to Easterseals NH, which is where he met Jonathan, a Military Veteran Service Care Coordinator. Jonathan helped Steve create a budget to better manage his finances. Having served as a Marine, Jonathan understood Steve’s circumstance and the two men quickly built a bond of trust.

Soon after, Steve was in a motorcycle accident and broke his leg. The accident put Steve out of work for a couple of months. This meant he didn’t have a source of income for the monthly payment for his tools. Steve knew without his tools he wouldn’t be able to work. Fortunately, the Veterans Count Emergency Financial Assistance Fund covered the payments while Steve was out of work.

Despite some positive gains, unknown to anyone, Steve was battling severe depression. One Friday evening, with a gun to his mouth and ready to end his own life, Steve sent a text to Jonathan. The message read, “You’re an awesome guy man. I’m sorry for all the bad stuff I have ever done. I only ever wanted to help people but I hurt them. I’m so sorry.”

Jonathan responded with, “Hey man, just checking to make sure you are okay. I might be misreading that last text. Can you respond and let me know how things are going?”

After some texts back and forth, Steve revealed that he felt as though he should have died in Iraq and the only thing he ever did right was to “bring his guys home.” The conversation transferred from text messages to a long phone call.

During this conversation, Jonathan got Steve to slide the gun under the refrigerator. This was to make it hard to access the gun and keep Steve safe from self-harm. From the beginning of the conversation, which was focused on making sure Steve was safe, until the end of the conversation in which Steve said “I can’t thank you enough,” the trust between Steve and his Care Coordinator was critical to ensuring Steve could receive the support he needed.

Over the weekend, Jonathan reached out to Steve several times to make sure he was OK. On Monday morning, Jonathan got Steve an appointment with Vet Care. Their first task was to establish a safety plan and offer counseling.

Now Steve is doing better than he was on that lonely Friday evening and is getting the help he needs for his mental health. Although there are still struggles, which can emerge at certain times of the year, such as the anniversary of a major event, or around the holidays, Steve now has the supports in place to cope.

Each day, 22 veterans in the United States take their own life and each day the goal of Easterseals NH Military & Veterans Services is to help in some way to bring that number down to zero. Due to the trust Steve had in his Care Coordinator to communicate his pain, a life may have been saved.