ESNH is the state’s largest private special education provider. Services range from intensive level care in highly-structured residential settings to supporting individuals in their community, family and/or independent living setting. Our educational programs ensure that students have consistent access to education in a supportive, nurturing environment, allowing students to progress in their treatment plans.

Few people are able to carry themselves with Kalia’s level of positivity and calm. It is hard to imagine that she once described herself as “confrontational and angry.” When 15-year-old Kalia came to ESNH’s Gammon Academy, an educational and residential facility, she faced many issues at home, at school, and within herself. She struggled with anxiety and depression from a young age and had attempted suicide multiple times. Kalia was in a self-destructive cycle that left her without feelings of hope for a future of any kind.

Before coming to Gammon Academy, Kalia had been removed from her parent’s home and was living at New Hampshire Hospital. Her first three months at Easterseals were a whirlwind of emotions where her anxiety continued to grow. “I had no idea what I was coming into at Easterseals,” she says of this transitional time. “I wasn’t sure where I belonged or what my place was in the world.”

Despite Kalia’s defensive nature, everyone at Easterseals, from the kitchen staff to the counselors, focused on empowering Kalia’s inner strength. Kalia believes her transformation began when she decided to trust her Easterseals team. “I went from having no one to having all of these people rooting for me,” she recalls. “They were concerned about the future I wanted for myself. I didn’t know I could have goals.”

Kalia became more involved at Gammon Academy and even joined the chorus. Through singing and counseling, Kalia was able to break down her own defenses and become more open to others and herself. Kalia was thriving.

She graduated from the program as well as from her local high school in 2016 and enrolled at New England College for accounting before transferring to Southern New Hampshire University to earn a degree in Adolescent Social Work, a field that is close to her heart. “I believe in a child’s potential that they might not see for themselves,” says Kalia. “I want to be their glasses.” 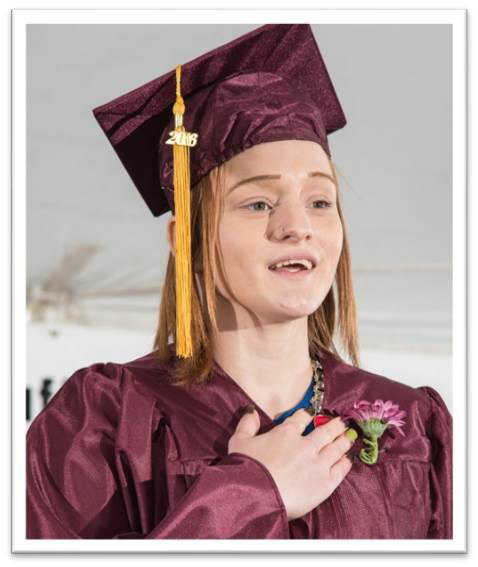 Additionally, Kalia received her certification in Human Trafficking Advocacy, and is working toward her Private Investigation License. She is very active in her church where she volunteers to help homeless people and those struggling with addiction.

These days, Kalia is living with her father again following family counseling provided by Easterseals. Looking back on her time at Easterseals, Kalia is most proud of the humility and self-awareness she gained there. In just a few years, Kalia, now age 21, transformed from a girl who thought she had no future to a young woman with plans to make this world a better place.

“You’re never too far gone to be transformed,” says Kalia. “Don’t give up, let people love you and everything will fall into place.”