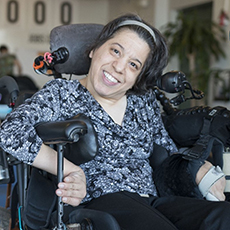 Entrepreneur, innovator, and most importantly disability advocate. Adriana Mallozzi has been receiving Easterseals’ services since she was a year old (initially in CT). Born with cerebral palsy, she is a quadriplegic wheelchair user. In 2005, Adriana came to Easterseals MA to get technology that would make her more independent at home. Easterseals Technology Specialist, Eric Oddleifson, provided her with environmental controls that enable her to open doors and better use her computer to control appliances. 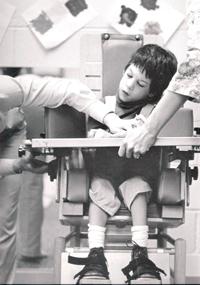 Eric’s efforts were so successful in increasing Adriana’s independence that she asked him to provide similar technology to help her be more independent at work, allowing Adriana to work full time as a Day Rehabilitation Service Manager at the Walnut Street Center. Adriana says, "It was only about ten years ago that I was able to turn on my lights, operate my TV, and open my door— silly little things like that— by myself, and that was a big deal for me. When you have to rely on others for every aspect of your life, which basically I have to, the small things really matter. Any type of control that you can have over your life is a big deal, for instance having full control of my mobile phone and access to apps such as Lyft and Uber. People with disabilities who rely on others for their daily living activities have very scheduled lives and it’s little things like that, that make a difference."

Adriana notes that she is grateful Easterseals affiliates work as a collaborative team across the country sharing resources, best practices, and assets for shared service lines. Adriana's ability to almost immediately receive impactful assistive technology services might not have been possible without Easterseals' impressive national infrastructure of services and programming.

Today, Adriana continues to stay actively involved in the disability community as both an innovator and advocate. She is not only on the Board of Directors for Easterseals MA, she is also the the Founder and CEO of Puffin Innovations. This company is focused on making human to computer interfaces that allow anyone without use of their hands to easily interact with technologies. In the fall of 2018, Adriana presented her work at Puffin Innovations at Hub Week Boston - a renowned joint collaboration between The Boston Globe, Harvard University, MIT, and Mass General Hospital. On average, 59 countries, 46 states, and 38 industries attend Hub Week Boston. Adriana commented on her company saying, "Initially developed for people with significant physical disabilities, our team quickly recognized a broader application of this technology to include military, public safety, and medical professionals. As a team, we hope not only to change people’s lives by using technology but also hope to change people’s mindsets. In this day and age, the modern workforce is the first real workforce where anyone can participate, whether you have a disability or not."

Check out this awesome interview with Adriana!