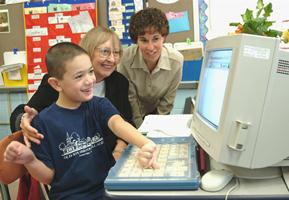 He learned the letters of the alphabet – on his own – when he was 15 months old.  At 20 months, he was reading newspapers, brochures, signs and just about everything else he saw.

When his preschool teacher spread newspapers on the tables for arts and crafts projects, Sam would pick up the projects to read the newspapers underneath.

Sam developed a serious illness at 4 ½ and today, at age 16, he wears leg braces and sometimes uses a wheelchair.  He also has difficulty using his arms and is unable to speak.

But Sam is still Sam.  He’s as bright, inquisitive and engaging as ever and still has the same sophisticated sense of humor.  He loves to read, and his latest hobby is the history of sports, particularly baseball.

The challenge was finding a way for him to communicate what he knew.

They started using boards with pictures and letters that Sam could point to and spell out words. Later, the school provided Sam with a special, easy-to-use computer keyboard.

Sam learned to use every device they tried – on his own – including the one he uses now.  His DynaVox can be programmed with different words and phrases and has voice output that Sam can use to actively participate in his sixth-grade class and talk with his friends.

Today, Sam is and honor roll student and a junior in regular classes at Framingham High School.

“It makes me happy to have this DynaVox,” Sam said.  “It’s 100 percent better to communicate.

The services Sam receives were made possible through a partnership with the Framingham Public Schools.