"Easterseals has been a big plus for me" 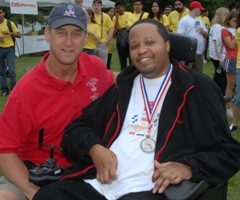 Several years ago, Remon Jourdan was a promising poet, a talented singer and rapper, and a recent college graduate looking forward to a career in education.  Known as “Rey,” he was always on the go and loved to make people smile.

Much of that changed, when a car accident left him paralyzed from the waist down and with limited use of his arms.

After coming home from the hospital, Rey was spending most of his time in bed in his Randolph apartment.  He didn’t want to be a burden to his family by continually asking for help.

I lost a lot of me through the accident," Rey said

Then his world changed again.  A doctor referred him to Easterseals, and he met Eric Oddleifson and Tom Quattrociocchi, Easterseals assistive technology specialists.

Eric and Tom provided Rey with a device that clips onto his bed or power wheelchair.  It converts Rey’s spoken commands into signals that control his computer, telephone, lights, radio, DVD and VCR.  The device also allows Rey, an admitted channel surfer, to change TV channels to his heart’s delight.

Eric and Tom also set up Rey with voice recognition software and specially adapted computer equipment, including a trackball mouse and modified keyboard that Rey uses by means of a flexible pointer attached to his wrist.

Thanks to Eric, Tom and Easterseals, Rey is using the computer to write and to stay in touch with his friends and family.  He found an online publisher for his first book of poetry, Write 2 Right, and created his own website, www.reyality.com.

Rey’s life has improved in other ways, too.  With visits from Eric and Tom, he began getting out of bed – and his apartment – more often.  His voice got stronger from dictating with his voice-recognition software.  And his sense of independence grew.

Rey’s involvement with Easterseals also has grown.  He and his daughter, Nerissa, have taken part in Walk With Me to raise money for Easterseals services for people with disabilities. Rey, 38, also became active in the Easterseals Regional Board.

He’s now an underground spoken-word poet who explores creative ways of inspiring and motivating others through music, writing and poetry.  His new children’s book – “Willie the Wheelchair” – explores issues of self-esteem and helps children learn to appreciate differences.

Easterseals presented Rey with its Personal Achievement Award in 2004 and enlisted him to narrate its new video.  In 2012, he was honored by the Boston Celtics with its Heroes Among Us Award for his dedication and commitment to helping others.

“Easterseals has been a big plus for me,” Rey said.  “It started a cycle in me.  I’m able to do a lot more and I want to do a lot more.  I’m challenging myself more than ever.”