Our success stories provide examples of how our Assistive Technology Regional Center helps individuals with disabilities. 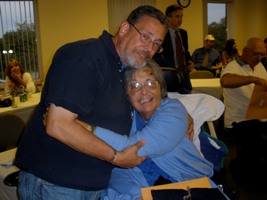 When Gary Saindon describes his wife, Phylis, he talks about her gentleness, her generous spirit and her desire to make the world a better place – coupled with resilience and incredible motivation.

Phylis, 64, has a master’s degree in social work.  She was working at a Vermont hotel in the fall of 2007 when she suffered a major stroke that left her partially paralyzed and unable to speak.  Since then, the couple has been working with Braintree and Spaulding Rehabilitation hospitals – and Easter Seals – to regain as many of her abilities as possible.  Phylis now resides in a Waltham nursing home.

“Katie, the specialist I worked with at the ATRC, was just incredible,” Gary said.  “Rather than just handing us the equipment, she took time to tell us about it.”

“It turned out Phylis was very ready to use the DynaVox,” he added.  “At one point, I walked into her room and heard her talking.  I thought she had a visitor, but she didn’t.  She was pushing buttons on the DynaVox and trying to repeat the words.

“She never lost her motivation to recover some language, although it will be a long road,” Gary said.  “This not only helps her communicate, it allows her to try out her language skills on her own.”

Gary has years of experience working as an advocate in the areas of housing, homelessness and hunger.  Even for him, navigating the system to find help for Phylis has been a constant struggle.

“You find the people who can really help you, like Easter Seals,” he said.  “For people who have limited means, being able to borrow equipment to try out before buying it is a tremendous help.

“It’s all a journey and a struggle, with angels along the way.  Easter Seals is a godsend.”

The Easter Seals services the Saindons received were made possible through a partnership with the Massachusetts Rehabilitation Commission.

She’s shy, but Danielle Klapman spoke right up when her doctor recently asked if she wanted to wear hearing aids.

“I am NOT wearing hearing aids,” she said.

Danielle has difficulty hearing conversations when there is background noise. She had tried hearing aids when she was younger but they hurt her ears and now, at 25, she also just didn’t want to be seen wearing them.

Amy took her to the Easter Seals Assistive Technology Regional Center in Boston to learn more about the device, which looks like an MP3 player and uses headphones.

Once she tried it out, Danielle really liked the Pocketalker. Easter Seals Specialist Meaghan Fitzgerald arranged for Danielle to borrow one to try out at home and at work. She also gave Amy and Danielle information about the Easter Seals Assistive Technology Mini-Loan program, which would help Danielle purchase a Pocketalker if it turned out to be a good fit.

It was. Amy returned the borrowed device to the center when the month-long loan period was over. Just two weeks later, Danielle received her own Pocketalker through the Assistive Technology Mini-Loan program.

“The process was very fast and convenient, and both Meaghan at the center and Jason Luciano [AT Loan program director] were very helpful,” Amy said. “Both programs were great. I would recommend them to anyone.”

As for Danielle, ask her how she likes her new Pocketalker and she’ll probably give you a big smile and say, “It’s good!”

The services Danielle received were made possible by a partnership between Easter Seals and MassMatch.

“Both programs were great. I would recommend them to anyone.” – Amy Coran