“I don’t know where we would be without the services Easter Seals is providing.” 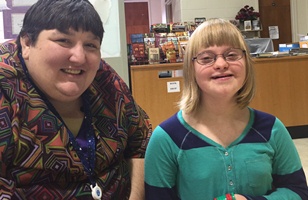 She also LOVES her visits from “Miss Kate,” her mother, Kathy Campbell says.  Miss Kate is Easter Seals Technology Specialist Kate Ahern, who has been working with Ashley, her parents and her team at school to help this hard-working girl succeed in the classroom.

Ashley has Down Syndrome and finds it hard to remember sequences of events.  And sometimes it’s hard to understand her when she speaks.

On her first consultation at Ashley’s school, Kate sat down with Ashley and worked with her for an hour and a half on an iPad.  Then she gave Ashley’s team recommendations on how it could benefit her, as well as suggestions on training that might be useful for her teachers.

“We were blown away,” Ashley’s mother, Kathy Campbell, said.

First, Ashley learned to move icons on her iPad with a special stylus that looked like a pencil – chosen especially for her.  Now she can access much of the iPad independently.

Kate also introduced Ashley to a number of iPad apps, including one called Pictello.  One of Ashley’s favorite things to do with Pictello is dictate and partially narrate her own stories about her life.  She likes this so much that she plays the stories over and over again.

Ashley also shares the books with anyone who will listen, including her teachers, classmates, therapists and friends.  Her enthusiasm even inspired another girl with disabilities to use Pictello.  Now the two friends are sharing the books they create.

For her schoolwork, Ashley’s teachers tell Kate what the class is working on and the key things they want Ashley to understand.  On the iPad, Kate combines text, pictures, audio and video into books Ashley uses to learn the material.

She’s also helping to coordinate the work Ashley does with her iPad in school and her iPad at home.

“Without Kate’s work, Ashley would not have been able to experience the success she has had in the classroom,” Kathy said.  “It amazes me how much has opened up for her.  I don’t know where we would be without the services Easter Seals is providing.”

The Easter Seals services Ashley receives are made possible by a partnership with the Fitchburg Public Schools.