“Having this technology has opened so many doors for me professionally and helped me enjoy the type of life I want to have.” 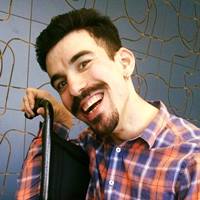 Ever since he was a little boy, Alexander Freeman has always known what he wanted to say.  The trouble was, he couldn’t express every idea, every word, the way other people could.

Alexander was born with cerebral palsy, and speaking is very difficult for him.  But today, he is an award-winning filmmaker having won the award for Best Documentary Feature for The Wounds We Cannot See at the 2016 Long Beach Indie International Film, Media and Music Festival in Long Beach, California.

How did Alexander get where he is today?  He did it with his incredible determination, the encouragement of his family and technology from Easter Seals Massachusetts.

Tom could see that Alexander, who has limited use of his hands, was frustrated by the computer access methods he had been using.  So Tom created a joystick Alexander could move with his chin or hand, and a switch he could click with his knee to select letters on an on-screen keyboard.

Once Alexander could communicate, the floodgates opened.  He began writing poetry, stories songs and scripts on the computer, and the world could finally see how thoughtful, intelligent and creative he is.

When Alexander went to college, Tom was there to ensure that he had computer access.  Alexander was also set up with a switch-adapted cell phone so he could stay in touch with his family and friends when he was out in his power wheelchair.

OUTCAST PRODUCTIONS (www.outcastproductions.biz), Alexander’s Production Company, produces and distributes short and feature films for the web and DVD.  It focus' on topics such as disability, sexuality, race, poverty, substance abuse and women's rights in order to engage, educate and encourage viewers to take part in changing how people perceive and treat minorities in society.

The Easter Seals MA services Alexander received were made possible through partnerships with the Brookline Public Schools and Massachusetts Rehabilitation Commission.