Friends, Family and Fun—Allison and Bobbi Jo share what Respite Weekends Mean for their Family 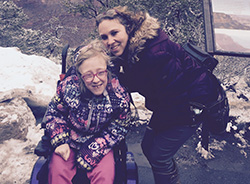 It’s hard to believe now that Allison used to have anxiety about being away from Bobbi Jo or difficulty in social interaction with peers. Much of Allison’s time was spent with medical professionals, childcare staff or adults in general. “At Camp, Allison started bonding with other children. Now she is just a social butterfly. She likes to talk and if she knows you, watch out because she will talk your ear off. Allison has a good memory, so don’t share something in conversation with her that you don’t want her to call you out on later,” Bobbi Jo says. 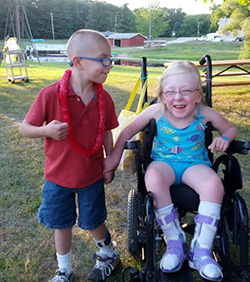 During respite weekends, Allison is known to hangout and sit with children who have extensive limitations with mobility or communication, just to be with them and show them they have a friend. “This brings tears to my eyes and humbleness to my heart,” Bobbi Jo says. “And she can do so much at Camp that we can’t offer her at home, like horseback riding, the rock climbing wall and swimming. But still, I believe her favorite part is just to be able to be around her friends.”

For Bobbi Jo, Easter Seals Iowa respite services have provided the break she needs to collect her thoughts and care for Allison when she returns. “If Easter Seals Iowa wasn’t a part of our life, we would be under a lot of stress. It’s provided Allison all of those new friends and experiences she has learned to love, and that little break helps me do even some of the simplest things, like going to the grocery store, that become more complicated when you are caring for a child with special needs,” Bobbi Jo says. 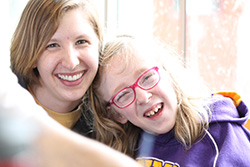 The staff at Camp Sunnyside hold a special place in Allison’s heart, and Bobbi Jo’s. Bobbi Jo was diagnosed with cancer at the age of six and went in and out of remission four times. During elementary and high school, Bobbi Jo attended camps through Children’s Cancer Connection.

“I am a cancer survivor and so Allison came to me by extreme surprise because doctors always told me that I would never be able to have children because of my years of chemotherapy and radiation treatments. I found out I was pregnant with her when I was six months along, and she came six weeks later.

I know your counselors do amazing things. I really understand the connection Allison has with the counselors, because I had that as a child, too. It has been a great blessing to have services like this in our lives,” Bobbi Jo said. 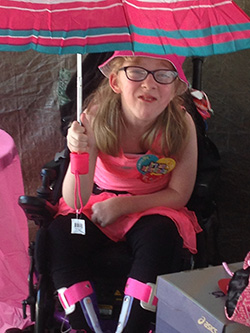 Other fun facts about Allison: Allison loves books and associating pictures with words. She loves photos, having her picture taken and remembering/analyzing photos she sees again on her mom’s phone or in a photo album.

Allison loves to sing Christian Music, her mom calls her a “backseat singer,” she can tell you the artist or song title just by listening to the first few lyrics!