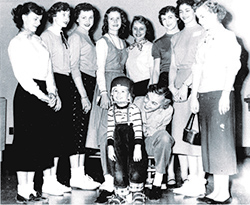 Al Buck describes himself as the “grade-school poster child in Iowa for Easter Seals.” And he has the posters to prove it!

Originally from Marshalltown, Iowa, Al was diagnosed with cerebral palsy at birth, living in an iron lung for the first few months of his life.

Al received occupational and physical therapy at Easter Seals Iowa. He still remembers the building to a tee, and the people who taught him how to walk and tie his shoes.

He was able to work with eight therapists and aides in his programming. “I was crawling to get anywhere I went. I didn’t even have the coordination to crawl. I still have the steel and leather leg braces I used to learn to walk.”

In third grade Al had his first chance to attend Camp Sunnyside. “It was my first time away from home. I was homesick a lot. But the hidden benefit of Camp Sunnyside is you’ve got all these young counselors. One counselor told me on the third or fourth day, ‘There’s nothing wrong here, have fun! Your parents aren’t going anywhere.’” Al learned how to be independent at camp.

Through learning independence and valuable life lessons at Camp Sunnyside, Al grew up in the Marshalltown Public School District. He became a baseball coach while a student at his high school. He went on to coach high school basketball and little league baseball. He was sent to the University of Iowa for two years by the Iowa State Department of Vocational Rehabilitation, and became a video scout for the University’s college basketball team as well as becoming an NCAA scout. He then went to University of California, Santa Barbara, where he became a video scout for the LA Lakers for 25 seasons and continued on to have a 35-year career in human resources at the Los Angeles International Airport. He explained “you have to make your own luck in life. The key to independent living is a job.”

Al believes Easter Seals Iowa makes a big impact on every camper that comes though. “The kids you deal with today are going to remember their experiences at Easter Seals and Camp Sunnyside. You do the work of angels,” Al says.

Al’s father recently passed away at the age of 98. Al sent this message to everyone who offered him condolences. He credits his “smart, committed, hard-working parents” for their dedication to his rehabilitation, independence and education, which allowed him to gain employment. Al says, "the keys to independent living are tenacious and resolute parenting and a job.”

How fortunate am I? My father (unwittingly in many cases) created a monster in me when he:

1. Stood strong through my very difficult and disabling birth.

2. Moved our family to Marshalltown, Iowa, so I would, in the 1950s, be mainstreamed and would get a real education, and not be housed in a sheltered workshop.

3. Put me into Marshalltown's very first Little League, where they made me a "coach".

4. Sent me away to have a unique surgery on my legs in the fourth grade and to a college prep- level residential school from the 4th-6th grades. It forced me to live independently.

6. Knew and became friendly with my closest friends.

7. Saw me graduate from high school, immediately move away from home, and get two college degrees.

8. Witnessed me have what is nearly a 40-year marriage.

9. Saw that I had three long, concurrent careers in City of LA 35 Years; NBA 25 years; NCAA 20 years and high school coaching 15 years. In spite of being told I wouldn't do anything but live at home and work at Goodwill.

10. LIVED long enough to see me retire from all three.

11. Drove and/or accompanied me to see my games that I coached and athletic events including MLB, NBA, NCAA, Indycar and NASCAR including my first baseball game in 1961 and Indy 500 in 1986, several Rose Bowls, a World Series in 1965 and NBA and NCAA Finals. Saw me earn five NBA World Championship rings and two high school championship rings as a basketball coach and scout.

13. Worked into his 80s and through his work ethic taught me how to work hard, but also how NOT to retire or how NOT to manage my money. I got my work ethic, tenacity, common sense and confidence to do it better, by watching him work and overcome adversity.

14. I know more about World War II and the Great Depression than the average bear.

15. He had only a 6th grade education. That alone made me realize how important education was, particularly to a person with a disability.

16.  Like most Dads, taught me all the STUFF that any boy needs to learn and made sure it stuck. Or else failure was my destiny. Because of him I didn't want to scratch and claw my way to mediocrity........

Some people blithely say theirs was the Greatest Dad in the world without saying the reasons why. I just told you why my Dad was.
Al Buck