Trey Schultz: SOARING Toward His Dreams 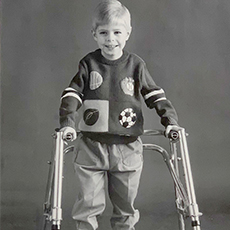 Trey Schultz may have been born with limits, but because of encouraging parents and a caring team at Easterseals Arkansas when he was a boy, the now 34-yearold is living life to the fullest. This proud Easterseals Preschool graduate now calls San Antonio, Texas, home and travels the world as an airline pilot.

Born in Austin, Texas, Trey and his family moved to Little Rock in the 1980s. Concerned with continuing Trey’s level of health services, the family immediately searched for a developmental therapy program for Trey and found Easterseals. By age 4, through therapies he received at
Easterseals, Trey accomplished physical goals no one ever thought was possible.

When Trey was born, he remained in the NICU for several days following nine hours of hard labor. After eight days and many tests later, the Schultzes went home with their first born without a diagnosis and unsure of their journey ahead. Six months later, Trey’s condition was diagnosed as arthrogryposis, a non-progressive disorder that resulted in many
of Trey’s muscles being replaced with fatty tissues.

The doctors said he might be able to walk someday after corrective surgery. He had received physical therapy from the time he was an infant, but even after corrective hip surgery, Trey was unable to bear weight on his legs. He couldn’t play with many of his baby toys because he didn’t have the strength to push the buttons or turn the knobs. To compensate, he scooted on his bottom. He was determined, even back then, to get where he wanted to go.

During his preschool days here, Trey was popular among his fellow classmates and never met a stranger. His mother was quoted as saying in a newsletter in 1989, “The social and educational skills Trey developed at Easterseals Preschool prepared him for the regular preschool he now he attends. Prior to moving to Arkansas, we had received services from other habilitation centers and had seen numerous therapists. Without a doubt, the administrators and therapists at Easters Seals far surpass any with which we had previously worked.”

As a boy, Trey loved any sport that included a ball and met life at full speed. As a successful pilot, it’s safe to say Trey is definitely fulfilling his childhood vision. Trey didn’t walk until he was 3 years old and credits his therapy at Easterseals as well as encouraging home environment for the strides he made. He remembers enjoying his Easterseals classroom experience and participating in the holiday lights ceremony at the state Capitol – a privilege our representatives still enjoy today.

His condition still affects his joints and especially hips, Trey says. “My hips are still tighter than the average person.” Trey would eventually move to El Dorado after his time at Easterseals. His young life was filled with typical adolescent activities such as sports and playing guitar. He graduated from the University of Louisiana at Monroe and worked for a time in Fayetteville as a flight instructor.

Trey says he remembers being interested in aviation for as long as he can remember. He pinpoints his initial interest to the time a doctor at Vanderbilt University gave him an airplane. “That’s my first memory of a plane, and I just continued to really be drawn to planes from then on.” 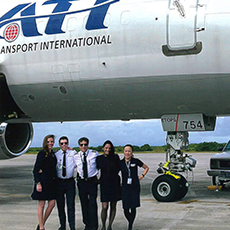 Everyone has his or her own limitations in life, Trey says. It’s important not to set limits or give up, he says. “Don’t be scared about trying something new. If you really work at something, it allows you to accomplish more than you think you can.”

The positive impact Easterseals made on Trey as a boy is lasting a lifetime. “I learned I could accomplish anything as I saw myself progressing. And my time here helped me interact more at other schools down the road. I learned the basics of setting goals and accomplishing them. If you want to do something, try to do it. Everyone has limitations, but half the battle is just setting a goal and going for it.”