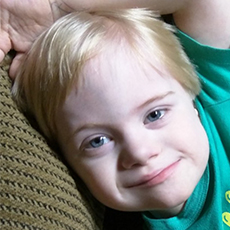 Henry has been receiving speech, occupational and physical therapies at Easterseals since he was nearly 2 years old. Now, 6, he loves to learn, and his family credits his progress and interests in life to his therapists. His mom, Alyssa, says he was evaluated as an infant and everything looked typical. By the time he was 18 months old, however, he wasn’t doing typical things 18-month-olds do, and Henry’s pediatrician recommended Easterseals. “We can’t say enough about Easterseals, it’s been such a blessing,” Alyssa says. Henry loves anything having to do with counting, the alphabet, counting, Sesame Street and his new interest the Muppet Show.