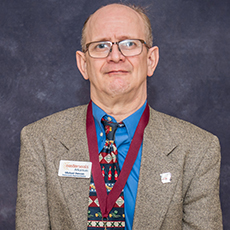 Michael was born and raised in Hot Springs and graduated from Lake Hamilton High School. In 2004, Michael went to Washington, D.C., as an advocate for individuals with disabilities to receive competitive pay for competitive employment. After moving to Little Rock, he began working at UAMS in the Housekeeping department. In 2014, Michael moved to Armistead Village Apartment and then transferred to Wilson Court to be closer to UAMS. He also decided to pursue a degree. Michael graduated from the University of Arkansas Pulaski Technical College in 2016, where he earned his Associate of Fine Arts and an Associate in Business. All of this while continuing to work at UAMS and earning the “Employee of the Month” twice!