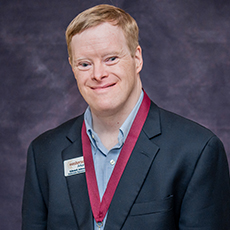 Edward has been a resident of Butler Adult Living Center since the summer of 1992. He has a very strong and supportive family and remains active in family activities while living at Butler. He lived in Brussels, Belgium when he was 10 and attended a French-speaking school for two years before joining his brothers at the International School of Brussels. He still knows a few French words. Edward is an avid bowler and is part of the Easterseals Special Olympics bowling team. He enjoys going out to eat and listening to music on his Discman while relaxing in his bedroom. The thing that Edward loves and looks forward to the most is spending time with his family at their family farm.